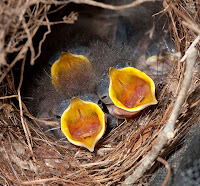 I know I'm easily entertained - and so I will be brief. A very cute brown Wren built a nest this Spring inside my tool bag that is hanging outside my back door. Every time I'd walk out the door. she would fly off hurriedly and create some ruckus in the yard to distract me from her nest. I checked of course and she had four cute brown speckled eggs in there. Tex suggested that I put a little plate with a couple of small strips of bacon out near the nest to assure her who was really in charge. Within the week, the eggs hatched and the faintest little bird chirps now fill the breezeway by the back door.
Well yesterday - which was such a beautiful day here, I left my back door open nearly the whole day. My little Wren was racing all over the yard and in the trees and under the truck picking up bugs and flying them back to the nest. She'd never seen the door open that long before and so - in search of worms I'm sure - she flew inside. Poor thing was flying around the living room, the kitchen, the studio - like in a maze, unable to find her way back out. For an hour I chased her gently back and forth from room to room. She was finally so tired that she just jumped onto the top of my broom and hung out there. I walked so slowly it was nearly a crawl and I led her over the pool table, out into the foyer, under the surveillance sign and back onto the porch. Having rested on the broom top trek across the house, she gave one wink and flew off.
I guess we got over the mutual respect dilemma for last night, she stood on the top of the tool bag - I looking at her from just inches away - and she just stood there, looking back at me. And so this morning - I shot a quick family portrait of her four kids - before they leave the roost and she then suffers from the empty nest syndrome.
Posted by Nocturnal Emissions at 9:49 AM No comments:

It doesn't look as though I will have as much time to write as I had anticipated. We are very busy each day taking pictures or moving from place to place. We shoot this morning in China Town and then fly to LA - and from there West across the states - ending up in Texas for a few days - on the way to Louisiana.

Yesterday we shot portraits of the most interesting fellow - an 86 year old Mexican immigrant who moved here in 1943. He is the vineyard manager - retired - for Francis Ford Coppola's vinyards in Napa and worked on that paticular land since moving here. He has four children, eight grand children and nine great grand children and is still as sharp as a tack and is apparently quite an Icon among the wine producers in the valley. He said that the most exciting time of year for him was in the winter when trimming the vines and in September at Harvest time. He said that after many years, you get to know a vine by name, recognize it, and are glad to see it again - some better than others. Lunch with Jim Laube, Editor of Wine Spectator.

We are shooting four to six portrais a day. The first production meeting with Disney is on Tuesday in LA.

I had a big plate of crab yesterday too -floating in butter. Yeah Lipator!

Posted by Nocturnal Emissions at 11:08 AM No comments:

It is my favorite kind of walking. And it doesn't matter whether I am in a forest, on a mountain trail or in a bustling city. To meander leisurely along without any particular place to be is I think one of the best ways to see what there is to see.

The conveyor belt squeaked in syncopation with my step as I passed the market. Boxes unloaded from the nearby truck slowly made their way into the basement from the sidewalk. I stepped into a small store that looked like something out of a Raider's movie – a Chinese medicine store that had every sort of ground root, dried fish, fin, slug or squid and more fungus than you could shake a stick at. Had I been able to read Chinese, I'm sure I would have seen the likes of bear Gaul bladder, tiger urine and eye of newt.

I could tell I was an outsider here, not looking like or speaking anything Chinese. I'd smile, use my hands expressively and ask a few questions. No one spoke English for the gringo. I thought of my farmer's tanned friend Hunter who could have wowed them with a little Manchurian charm. I could not help but smile as I stood with these interesting people, wishing that I knew their names and a little bit about them. I knew though that they knew that I meant them no harm.

I have one day left in the City before flying South to LA. The weather could not be more perfect. I will walk some more before I go with a little more work. 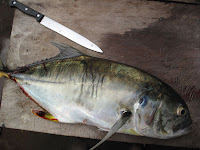 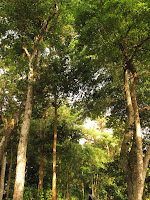 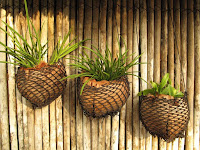 Posted by Nocturnal Emissions at 3:52 PM No comments: