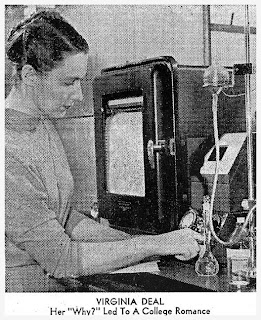 Bay Wife Gets Tribute From Oil Industry
Virginia Deal is Artist, Scientist, and Homemaker All Wrapped Up In One

Virginia Z. Deal is a soft spoken young woman with a lifelong habit of asking why. Curiosity and a refusal to accept the traditional, even in the realm of chemistry, are habits she has no intention of changing. Why should she?
Why has made a research chemist of her, resulted in papers and achievements which have caused the Desk and Derrick Club of Los Angeles to nominate her for the May international petroleum exposition award in Oklahoma City of “oil Woman of the Year”. Why has has resulted in her marriage to her chemistry instructor at Duke University, North Carolina.
Since Virginia Z. Deal has been employed as a chemist at Shell Development Company, Emeryville, for nearly 10 years (ever since her graduation at Duke), and she is not a member of the Desk and Derrick Club, the Los Angeles girls must consider her outstanding. Desk and Derrick clubs are for women in the oil industry.
Virginia Z. Deal is a very versatile young woman. Actually a scholar who can work on such problems as ferreting out the destructive nitrogen and sulphur in oil, she is also a artist.
She has shared in the production of a technical paper on “The Determination of Basic Nitrogen in Oils” and she has whipped up safety posters, bond posters, farewell cards for retiring employees and a manual on how to make reports.
She has been a member of a team designing a commercial exhibit with mobiles nad dramatic visual arguments for such prosaic products as insecticides and fertilizers.
A young woman with an enviable complexion and bright, candid eyes, Virginia Deal is pretty, even with her hair drawn back in a severe part and wound in a braided bun. Somehow, it is not hard to see her as both an artist and an scientist.
She explains it all this way: “I always liked to sketch, especially in pen and ink. I might have taken up art, but I liked science. And I became more interested in chemistry when my instructor became interested in me. He said it was because I was the only student who ever asked  questions. My notebooks were filled with whys and question marks. Instructors and students aren’t supposed to fall in love, but we did, ethics or not.
We were married right after I graduated. But Carl had not yet finished his graduate studies, so when Shell Development wanted to hire both of us, I came on ahead to California. During the war they relaxed their rule against hiring married couples. There are five couples left here.
“We hope they leave it that way. I like working in the same office with my husband. We console each other over our knotty problems in our work but seldom help each other. Usually we are too busy at home.
There’s never any friction when one or the other has to work late. In fact, I have to do a lot of that. we understand each others problems in a way couples who don’t share the same work never could.”
The Deals now live in a new house on a knoll in Orinda. He has built fences, bricked about the house, installed a sprinkler system and built furniture. They are trying to work out a planting that will preserve the view but protect the place from the wind.
Daughter of a nurseryman and a florist in upper New York State, Mrs. Deal still marvels at the geraniums and fuchsias which seemed to grow wild when she arrived here. She is happy that camelias and fuchsias do well in Orinda, expects to have a garden chiefly of native shrubs and flowers.
Until the Deals bought their new home they shared in the housework. They had a nice elastic routine that spared each one from too many stints at the dish pan. But Mrs. Deal thinks the automated dishwasher her husband gave her one birthday was as much a boon to him as it was to her.
The Deal livestock consists of seven cats (six Burmese,  including four kittens and a Manx cat). Mrs. Deal says Burmese cats have much sweeter voices than Siamese. In fact she is sure she understands every inflection in their voices.
“I know it sounds as if I were talking about a child, but you can almost know what they are saying.”
A charter member of the new Conta Costa chapter of Phi Mu Fraternity “alums,” Mrs. deal manages to turn out her share of bean bags and toys for hospitalized children, current projects of the group.

VIRGINIA DEAL
Her “Why?” led to a College Romance

Posted by Nocturnal Emissions at 8:06 PM No comments: